While Marisha started collecting some branchwood Alexander and me were driving up the hill in the forest. Tomek and me decided to sleep here in, according to Alexander, one of the last wild places in Bulgara: the Cape Emine. This rocky cape is the eastern most tip of the Balkan Mountains where the mountains reach all the way into the ocean. For this we had to collect some wood to make a fire for the night. 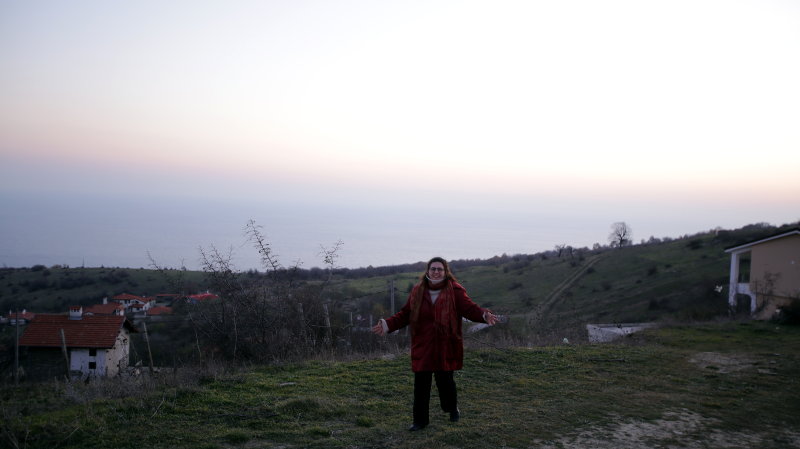 With a decent degree of boldness Alexander drove up the path in the forest. I don’t know what made him considder this a drivable path for his car. It was so steep and difficult, that if you are too slow you will not make it. In this moment I saw an adventurer driving up this rough path with lots of speed just boldly assuming that it will work out.

In the forest we completely filled up the car with fire wood so we would have enoguh for the whole night. Back down we huddle the wood together next to our backpacks. Alexander and Marisha had prepared some magnificient dinner for us: 4 thick and juicy peaces of meat, salad, vegetables and we also had some rice. Additionally they left us some plates and a grate so we could have a delicious barbecue. I was touched by how they always did their best to make us having a great time. They wanted to pick us up again the next morning and bring us to the next petrol station. When they said goodbye Marisha mentioned that we should make sure to finish all the food otherwise we would get some visitors in the night.

After they left we planned our camp. Where do we have the fire, where do we sleep. It was a clear night without wind. Therefore we wanted to sleep without tent just under the stars. We started the fire and began to prepare the food. 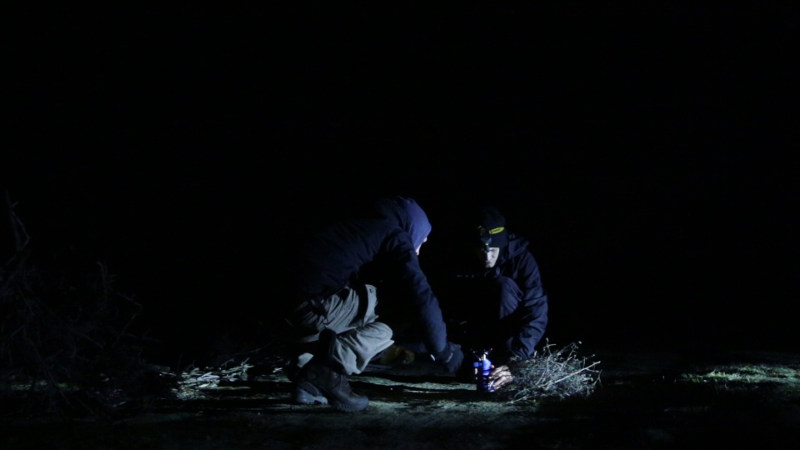 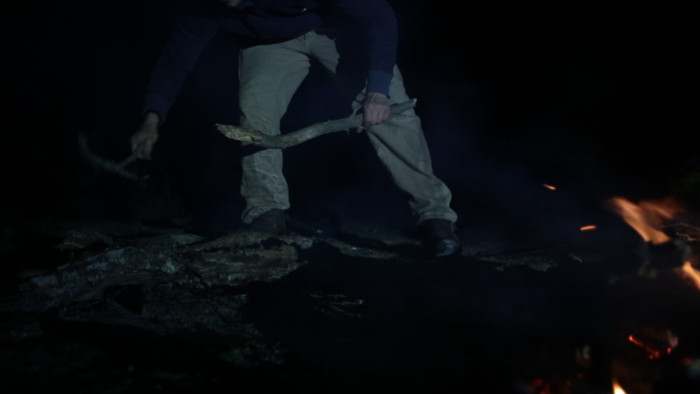 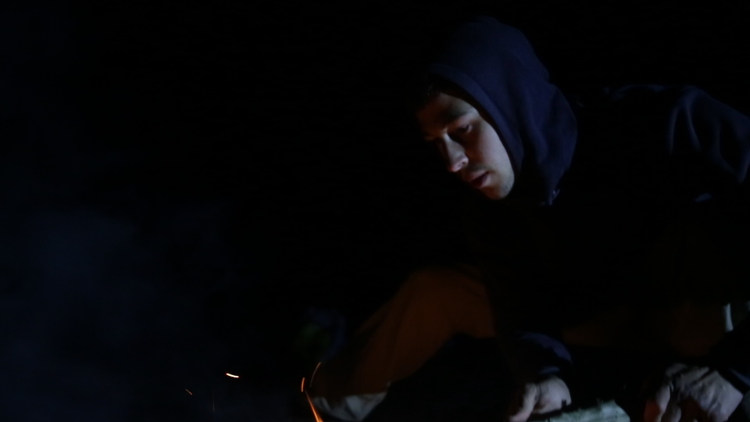 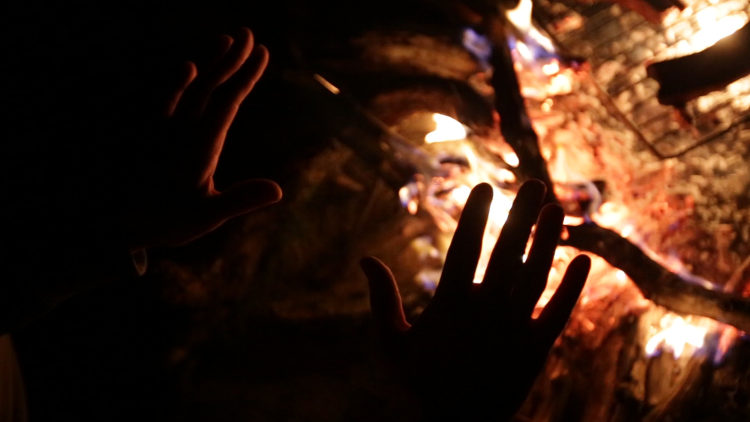 I was proud of my fire. Probably we had enough wood for the whole night. We cooked the rice and the vegetables in the fire and when we put the fresh meat on the grate over the embers it was heavily smoking. The smoky smell of the meat rise to our noses and we were really looking forward to eat. 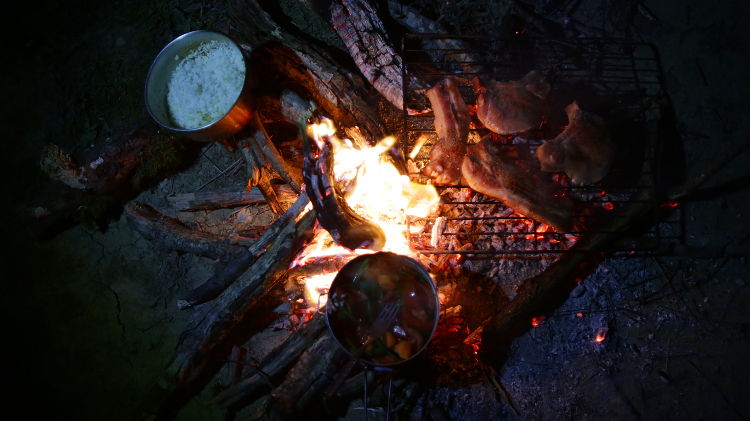 We sat there quite for a while in the stillness of the night caring about the food and the fire. Yet suddenly we heard a strange howling coming from the bushes. Instantely I looked at Tomek. „Okay there are two dogs.“, he stated. Then we heard another howling and Tomek added: „… and they are close!“ I replied: „… and you are sure these are dogs?“ I was pretty sure that these were no dogs. To me it actually sounded more like wolves. We stood up to listen more carefully. We lighted in the dark where we assumed the howling was coming from and saw… nothing. I knew wolves are usually rather shy animals so I shouted in the dark. I prefered them to know that this is our place. But I guess they already knew, especially that we were cooking…

With the feeling of having protected our camp, we continued our cooking. Yet the howling was not gone. Quite the contrary, it was coming closer coming now straight from the bushes around us. Determined to chase them away I grabbed a strong stick and we walked up to the bushes where we heard the howling from. Together we started shouting again as loud as possible. Then I put the stick right next to the fire, just in case we needed to protect ourselves. In this moment I was not overly worried about wolves since I assumed them to be very shy animals that keep away from humans. But the fact that they didn’t really care about our tries to chase them away and that they were coming closer started to make me worry. I assume the heavily smoking meat was attracting them.

Suddenly we heard howling all around our place. There was no doubt anymore that these animals had circled us and that they do not scare away. When I was lighting in the dark I saw hungry eyes around the bushes. Now we had to do something. I had the feeling that we only had seconds to do something. But what could we do? Where would be a place to be safe out here? I looked around and quickly went through our options. This was pretty much open territory in the dark, so no places to hide… Then I remembered the house we were passing in the daytime. There was something like a villa with a high fence around 100m away from us. „We could climb over that fence… this is the only option.“, I thought. On the other hand we had to leave the fireplace for this but the choice was made. Without loosing any more time I put my head lamp around my kneck, to blind them in case they are attacking and took the heavy stick in my free hand. I was convienced, the best you can do when they are attack is to defend yourself in a proper way. Tomek was armed with his pepper gas and like this, close together we walked through the dark. Scared but concentrated we were prepared for an attacking wolf and ready to defend us. 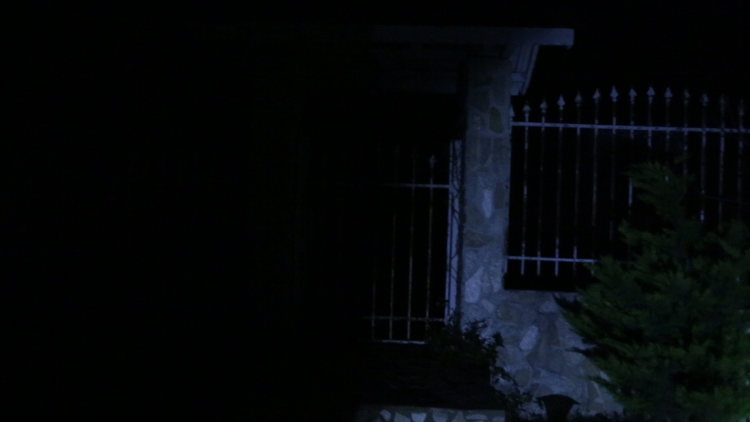 There was no light in the villa and the shutters were shut down. We were pretty sure that right now there was no one living in this house. Marisha told us that in winter 90 percent of the houses here are empty. Anyway we had no time to think about, so I put down my backpack and climbed over the fence. After that Tomek gave me both our backpacks over the fence and climbed after me. We were in the garden of the house. 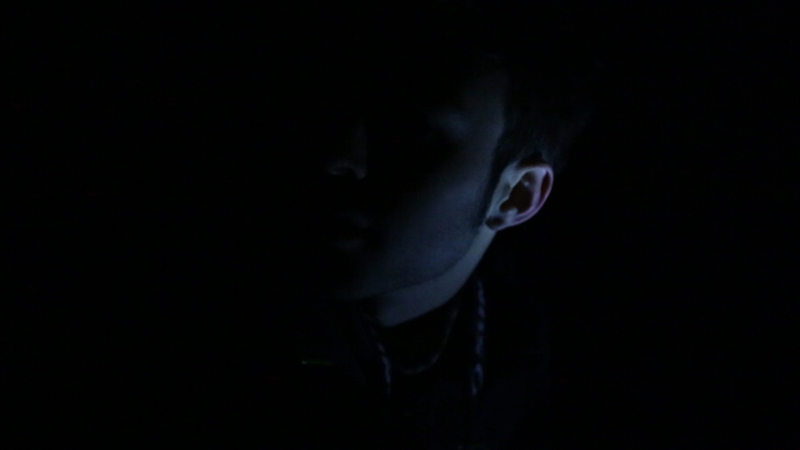 We pretty much looked like robbers already so we tried not to capture too much attention. We checked the area as good as we can without torches. When we were sneaking around the corner we were shocked. There was a car standing in the entraceway. Why would there be a car if the house was empty? I was not sure anymore. Of course I was afraid of the wolves but just breaking into this property also felt a bit risky. Therefore we decided that it would be the best just to ring the door bell to see if there is someone here. 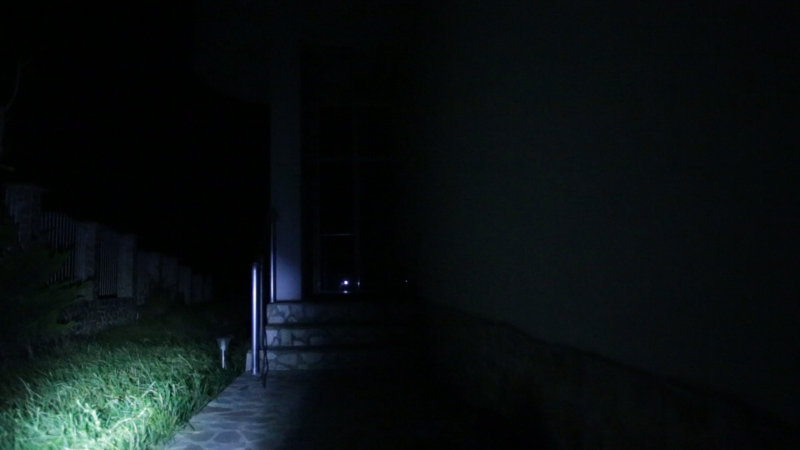 We rang the bell several times but appearantly there was no one at home. „Okay, let’s eat our food. As quick as we can.“ We sat on the stones of the entrance and ate the meat first, then the rice and the vegetables. Anyway, it was a lot and we couldn’t finish it all. We thought about what to do with the rest. Should we keep it inside the fence or rather outside? Outside we could attracted them even more by just feeding them and make them want more. However, if we would leave it outside they had no reason to find a way inside. This is what we believed and what we did. At this time I was already thinking about the fence and if it would be really able to keep the animals away.

In the dark we sneaked around the house on the search for an acceptable place to sleep. We chose the place on the terrasse between the house and the jeep. It seemed like the most protected spot for us. Since we were inside the fence we haven’t heard so much howling anymore but this changed the moment we went in our sleeping bags. We heard howling and animals walking around the fence. Wolves in the night that are not scared away made me more than worried. I was scared and again I thought about the fence. Would this really keep them away… This thought had a really haunting quality. So I talked with Tomek about our defending strategy. In case of an attack we planned to go in the protected corner, blind them and defend ourselves with the pepper gas and the knifes. I only hoped this night would pass. 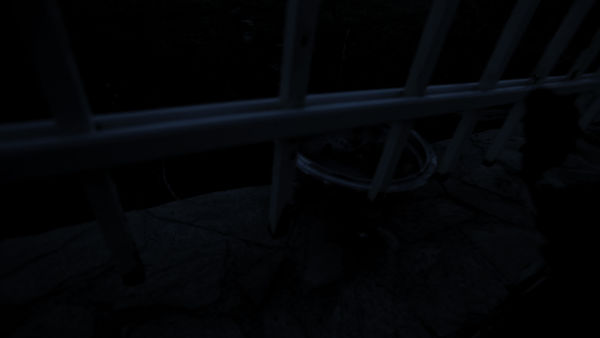 Suddenly we heard a different sound. I assumed it would be our pots and asked Tomek if we want to have a look. He refused but I just had to check and also wanted to check the fence. So I took the torch and the pepper gas and made my way to the fence where we left the pots. Carefully I lighted to the fence. Indeed, there were two pots missing and the third one was empty as well. The adrenaline in my body did not drop this night and until dawn I listened to every sound around us being totally alerted.

In the morning we packed our stuff and climbed back over the fence, you can not believe how happy I was about that. I looked for my pot and found it some meters away from the fence. 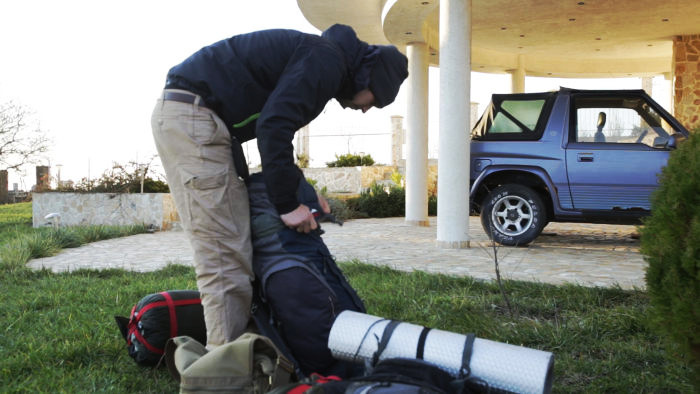 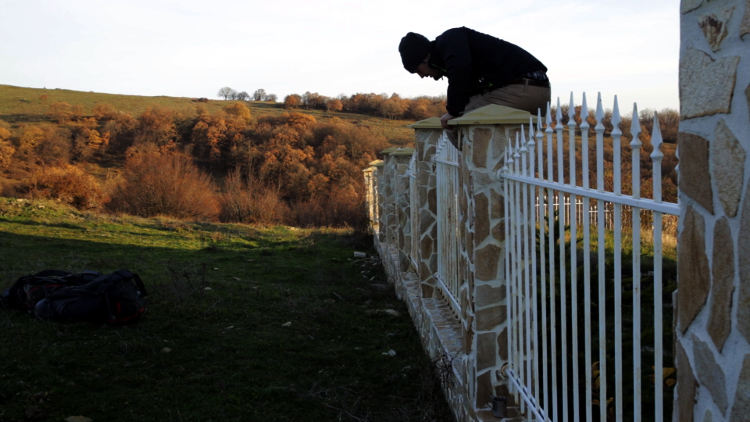 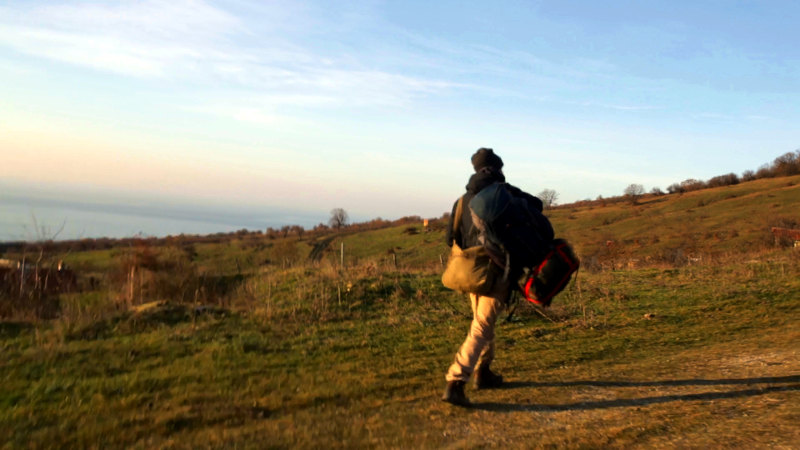 We arrived back at our fireplace and looking over the village to the ocean I was just feeling happy to be alive. 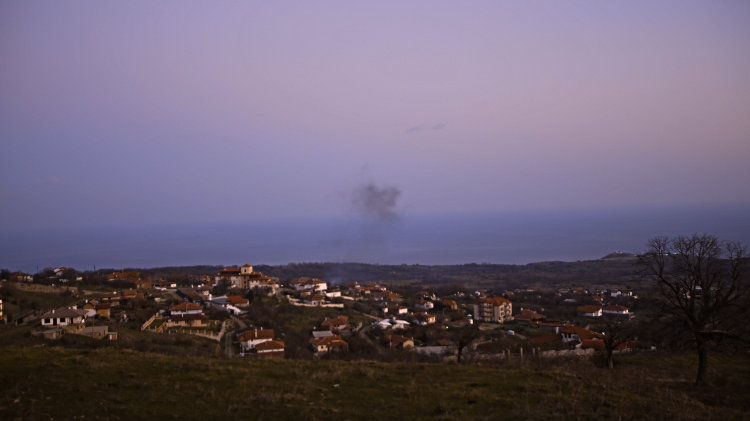 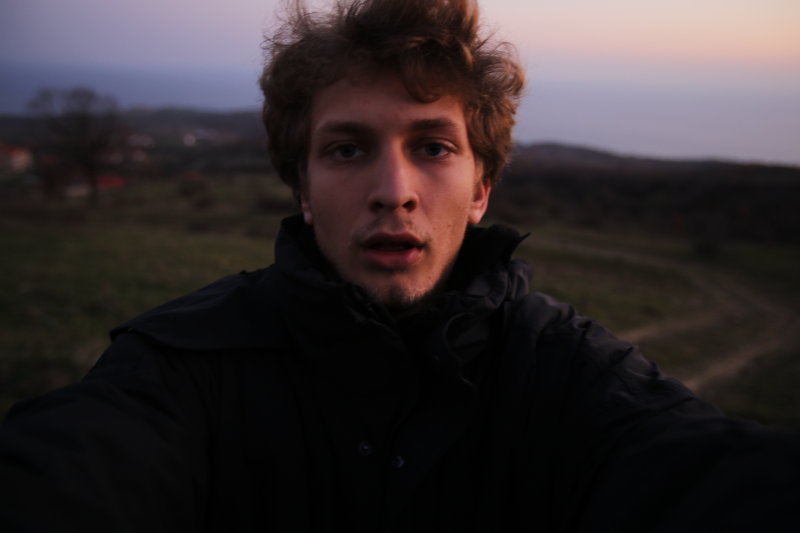 Alexander and Maria came back at around 10am and invited us for a coffee in the village. When the owner heard our story she was sure: „These were jackals!“ Then she added: „They are howling in the same scary way like wolves do but if it would have been wolves you wouldn’t be sitting here now.“ After that she brought me and Tomek breakfast and Maria translated: „It’s on the house!“ 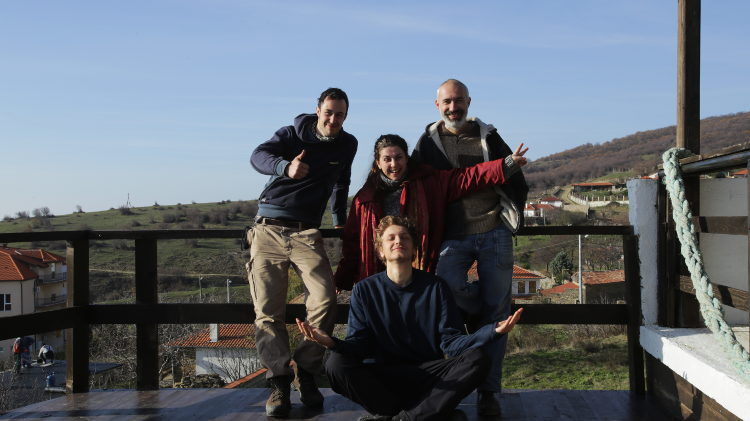