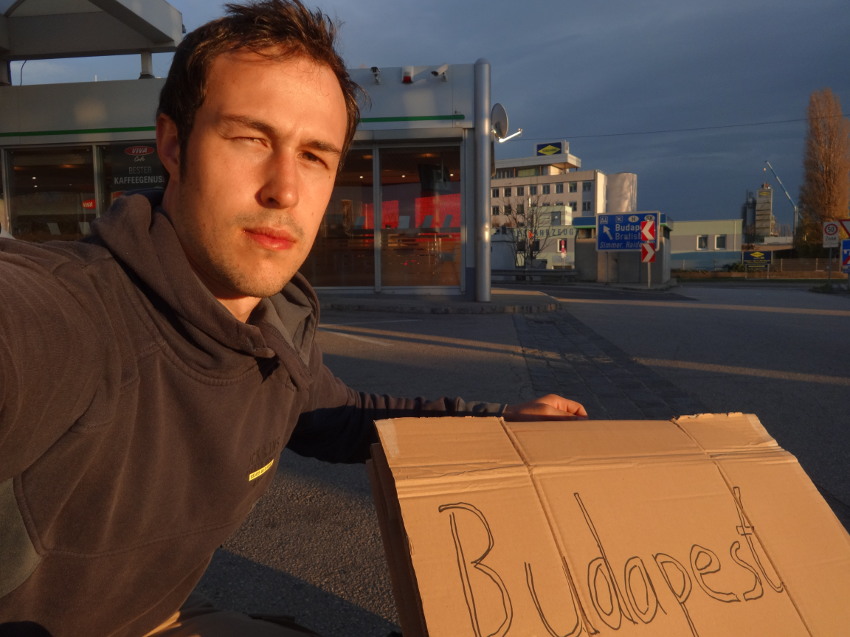 After the first night in my tent, I started the day slowly. Breakfast, then a little workout – and it felt so good to do all that in this nature. I was in very positive mood, so afterwards I followed the little path back to the station. I was feeling ready to start an adventure. It took only five minutes and I found two Austrian guys that were just walking out of the station with beer and some croissants for breakfast. Even though I refused the beer for breakfast they agreed to take me to Vienna. When we stop on the way to Vienna for the one guy to go to the toilet he came back with another sixpack. „I thought you wanted to go to the toilet?“, was all the driver said. On the way I decided to go straight to the city center of Vienna since I have never been there before. That was the first mistake of the day… 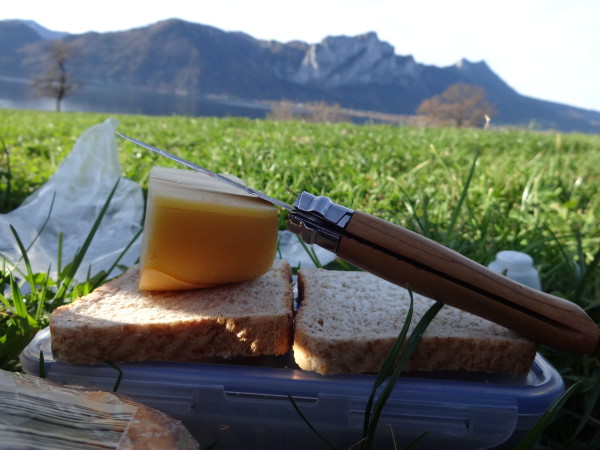 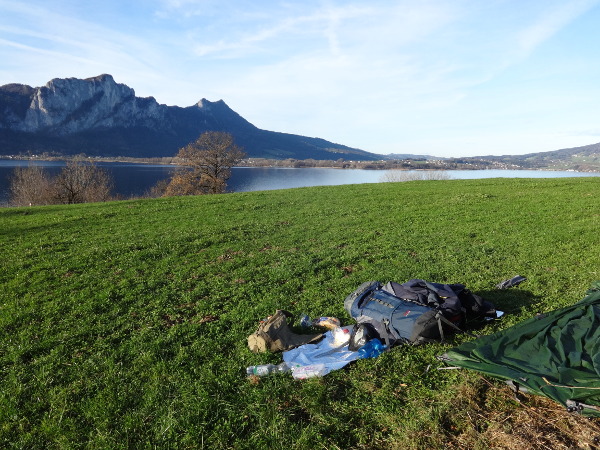 After a short stay in Vienna I took the bus from the city center to a petrol station at the highway going out of Vienna. The spot was rather bad since most of the people only stayed in Vienna or around. Therefore I wrote a little sign with „Budapest“ on it and stood right by the exit of the station.

After about one hour later a slovakian guy stopped with his jeep. He wasn’t speaking any English but the few words in German he could speak were enough to explain that I wanted to go to Budapest. He was actually on the way to Bratislava in Slovakia, so he agreed to drop me off at a petrol station before the junction to Bratislava. That sounded good, so lets leave this shitty place! Unfortunately we kind of missed the last petrol station on the way to Budapest. So suddenly I was on the way to Slovakia! The Slovakian driver suggested to drive me to the slovakian-hungerian border which seemed like a possible solution. In this moment I still felt optimistic, so without knowing how hard it would get, let’s go to Slovakia!

At around 4 pm he dropped me off at the slovakian-hungerian border. I felt kind of uncomfortable standing here alone at this foreign border crossing – in a way that feeling should prove right. Instantely I asked a passing young guy walking past if he would go to Budapest. He did and when I asked if he could give me a lift he said: „Sure, no problem, no problem.“ He was just about to turn around when he added: „There is just a little problem. I have to make some phone calls first. 5 minutes, then we can go!“ Shouldn’t be the problem! This guy which was from Czech Republic walked over to two older men and appearently they started to solve their problem. So I waited… and waited… and waited. When he came back to talk to me half an hour later he seemed a lot less relaxed than he has been before and also those guys seemed more creepy now talking so long on their phones. One hour later I was still standing there knowing that since it was already getting dark my chances to get another lift from here are really dropping. So I got a little bit angry and in my head I was saying all the time „Five minutes, fucking 5 minutes.“ But what could I do standing here now alone in the dark at the border of Slovakia and Hungary.

After some more time I couldn’t wait anylonger and decided to start asking people again. I knew it was not really promising here in the dark but I had to do something. My optimism dropped with every new rejection. But what other option than continuing did I have? Finally I met a chubby old Bulgarian man, who meant: „Yes… why not… I am just going really slowly because I am following my friend in a truck.“ Everything was better than waiting here in the dark. So we got into his old black Mercedes. I was really not in the mood to have conversation and I also didn’t feel so comfortable. I just wanted to arrive in Budapest, thats all. After five minutes waiting in his car, a thin man with a winter hut and a grim look approached us. It was his friend and they started to argue about something and the thin man got quite loud and aggressive. I had the bad feeling that the argument was about me – and I was right: „He was asking why I am taking you… It’s actually his car and he is pretty stressed… But I said, to have conversation to not fall asleep.“ – „Good answer“ I responded. We waited for about half an hour when the Bulgarian received a call from his friend which he failed to answer. After another 30 minutes of waiting he finally tried to call back. „No service“ he said annoyed. It was now around 8pm and I could feel the impatience was getting stronger and stronger and this impatience was mixed more and more with desperation . We were standing at the side of the road waiting when suddenly a man with a torch approached our car. It was a police officer who told us that we are not allow to stand here, we could go to the parking area 5km down the highway. So with the intense speed of 50km/h we drove down the highway and some trucks were hooting badly to us. The Bulgarian guy shouted „Get outta my face!“ and continued driving on the road side so the trucks could pass. After we couldn’t find the parking area we stopped again on the road side of the motorway. „I hope they will not catch us again“ he said.

That was when the big time of waiting really started. After waiting for 2 more hours and no indication of improvement I started to think of alternatives. I already tried everything to convience him to continue driving so I opened the door to look for a possible place to sleep. I just couldn’t wait in this car any longer. We were standing on a bridge on the highway and it was dark. So no chance of finding a place to sleep here. 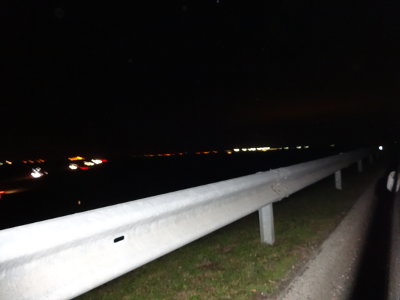 Finally he started the car again. I mean he tried to start it but it wasn’t starting. The battery died since we were standing here with the light turned on for a long time. The guy didn’t seem to care at all so I started to think again and offered him to push the car to get it started. „No, no. That is just our last option.“ – „So what is your plan then?!“ I asked annoyed – „We wait.“ I was upset. Then there was hope again. A big truck were loudly hooting to us. It was the friend we were waiting for. I was so grateful that something was continuing here. Unfortunately the friend was out of himself – he was really out of Control now. He sat into our car and tried to start the car. It was not starting. He was shouting and slamming the door and I had to gulp.

After getting start-up aid and contiuing driving I noticed that the Bulgarian driver was also not that relaxed anymore. „Why am I taking you.. why am I taking you.“ But I noticed that he actually wasn’t blaming me. Still at the next petrol station we stopped again and after another argument of the two guys I had to leave. „I am really sorry but we will just continue driving tomorrow. I am really sorry!“ I told him it was no problem and kindly said goodbye. When I got out of the car with my backpack on the shoulders I was actually very happy to got out of there. And now I was standing at a lonely petrol station in Hungary! 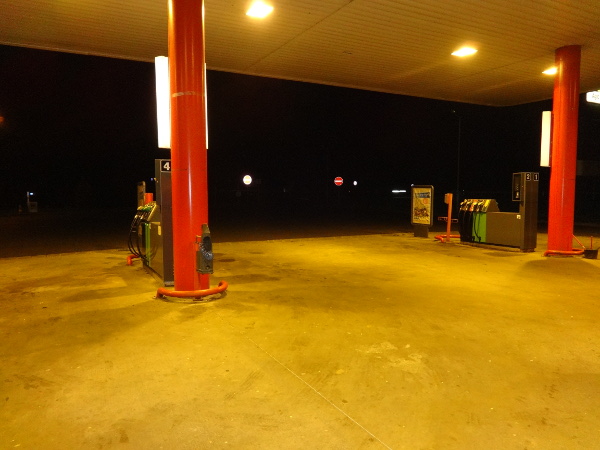 I looked around and check the environment. When I was walking from the parking area to the petrol station I saw a young man walking up to me from a dark corner. He showed me an iphone and said: iphone?“ Oh what a nice place! I just walked around him. Very empty petrol station with almost no cars. That’s why I started again to look around if there might be a place to sleep – I saw some promising bushes. When I walked up to them I noticed that there were already people. No clue what kind of people these were but it was creepy. No way I would sleep here. If necessary I would wait all night for a car.

It was a good decicion because only a little time later I met a young driver who could give me a lift to Budapest. It took a load off my mind. He was speaking excellent English and was super friendly. He saved the day for me and took me straight to the place in Budapest were I would meet my friend Judit. I said thank you to that guy but I am sure he didn’t know how much he was helping me and how grateful I was. After ten minutes of waiting at that square someone was poking me from behind. I turned around and I was so happy to see my friend Judit. She smiled at me and we hugged. What a release!