From Kashgar I took a bus out of the city to the only road going first 1500km through the Taklamakan desert North-East and several thousand kilometers through a varity of landscapes like the Gobi desert and the Tibetian high plaine. 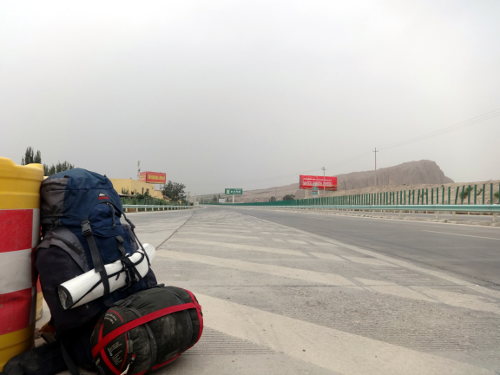 After I left the bus I was walking along the highway. From here I tried to wave down the cars. It was very difficult and none of the few cars wanted to stop. The heat made it rough and soon I got very thirsty. I didn’t take enough water with me. Finally a car stopped and I made sure the driver didn’t want money. He gave me a ride and invited me to some basic meat dish on the street. I drunk as much yellow tea as I possible could. 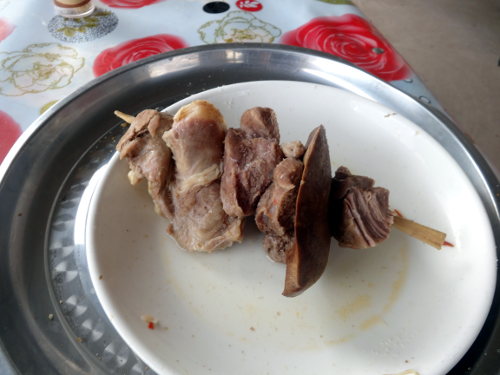 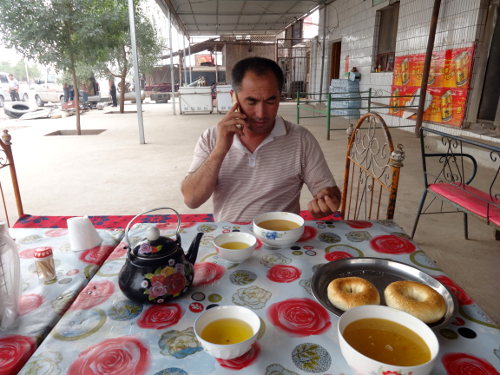 After that car I stopped a truck. For the truck I was sure the driver wouldn’t ask for money. We drove along the desert highway in his old truck passing weird oil production machines and futuristic-looking oil plants. It was already night when the driver stopped in a village. Here we parted company since he had to go another way. I got of the truck and went to buy some water at a little stall. In that moment I noticed the truck driver again. When I wanted to pay for my water he screwed himself in. Decisive pushed my money away and paid for my water. Then he bought a second bottle for me. I said thank you and walked further along the road. I tried to get another ride with little success. This time a was more reasonable and acknowlegded that it would make more sense to continue tomorrow. On a little path I walked out of the city for about 200m and stopped at the side of a little path. In the dark I started to put up my tent. This area is famous for strong winds and I could feel it. The tent pegs didn’t hold at all in the sandy ground and I found neither big stones nor something that I could tie my tent to. So after trying several things I just crawled into the not put up tent. Like this I had at least something covering me and protection from the mosqitos. In the night I woke up several times and watched awake and fascinated the landscape around me. 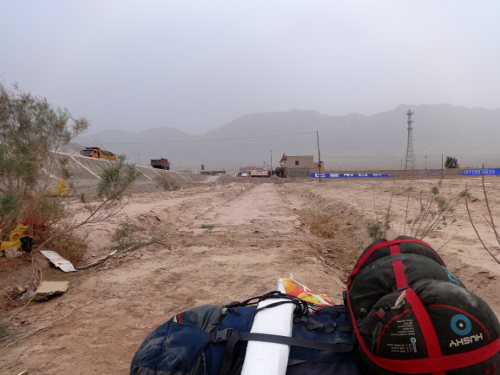 The next morning I sneaked through the barb wire fence that stretches along the whole highway for some reason. The road was really empty again and the few cars just rushed past me. I had little hope I would find a car here soon. When finally a car stopped the driver asked for money and I refused the ride. So after two depressing hours I was still standing in the same place waiting for cars. I started to doubt my plan. 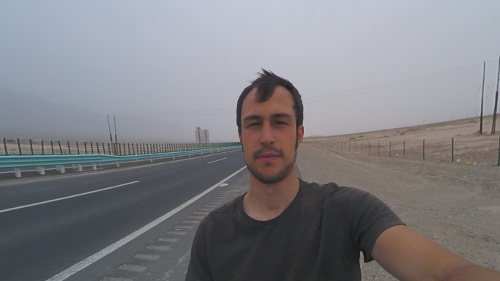 But after half an hours another car stopped. I just asked quickly “No taxi?” and got into the car before the driver had the chance to change his mind. He seemed like a friendly guy. His car was old not climatized and we poked along the empty highway with a speed of maximum 80 km/h. Yet he was going almost 1000km/h the same way like me. 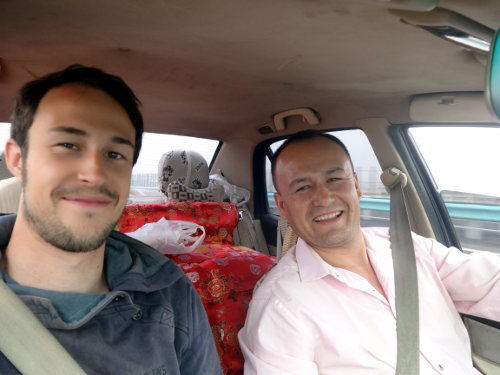 Two days we went together on this highway. Every hours he stopped the car waiting for the engine to cool down. On the afternoon he laid down in front of a highway and fell asleep for 2 hours. Like this my speed was not tremendously high. 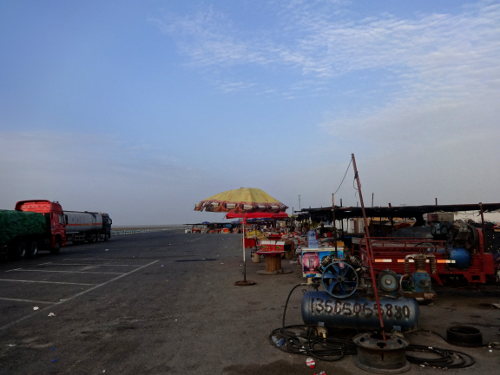 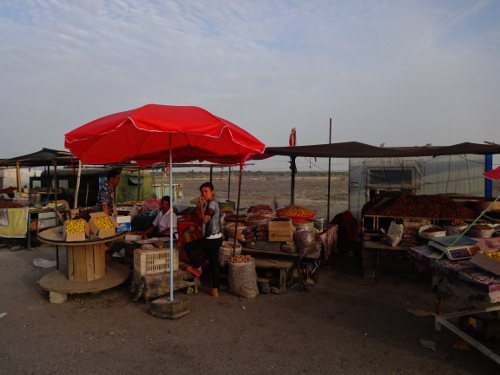 In the evening we stopped at little store and bought some instant noodles and a sausage – at least I hope it was sausage. Afterwards we drove until late in the night. Most of the time I was sleeping. When I woke up and saw the driver’s eyes slowly closing I got a terrible fright. He opened his eyes again and we drove off the next service station on the road.

He slept in the car and I told him to find a place somewhere outside to sleep. I sneaked around the building of the service area on the search for a ladder to the rooftop or an unlocked door. I had no success and the area outside also wasn’t looking so friendly. So I went inside the service station and saw a man without t-shirt sleeping on a row of metall chairs. I was sure to find a better place to sleep and continued looking around. Inside I found a sliding door. It was not locked. Behind the door there was a nice and clean red couch with a pillow. “My private room!”, I thought and pushed the door to the side. After brushing my teeth in the bathroom a went to my private room and quickly fell asleep on the comfortable couch.

Suddenly someone opened the sliding door. Bright light flooded in the room and blinded me. I scared up. It was very early morning and the driver was already looking a while for me. He wanted to continue his drive. We started right away.

The road seemed endless and I had the feeling like this I would never arrive. 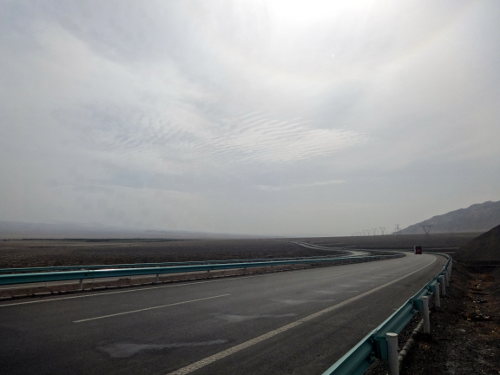 At one moment the driver noticed something was wrong with his brakes – to be more accurate, the brakes were not working at all. Heavily he pushed the brakes but nothing happened. While he was doing this he look at me smiling and laughing as it would be something really funny that his brakes were not working. After that we left the highway and to find a mechanic in some small village. Some kind of mechanic guys had a look but they couldn’t do anything. He would have to go to the next city. So without brakes we contined one hundred kilometers to the closest city. 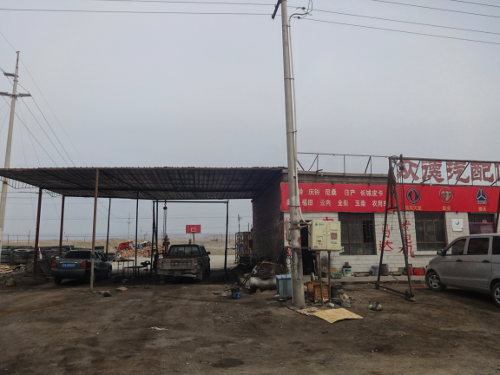 Before that city I wanted to leave the car. I had enough. I thanked him and said I would be in a little hurry and find another car. And again it happened that he was asking for money. Friendly I smiled at him and said “no sorry! (I said in the beginning!)” . I felt like he at least wanted to give it a try.

Out of the car I was in charge again of stopping another car. While I was just talking to a guy that wanted money I saw that a big and expensive SUV stopped a couple of meters away. Perfect, this was my car, I knew! It was not Uygurs but a young Chinese couple and they even spoke some English. The Chinese hospitality was great, always. The couple gave me water and also something to eat. The air-conditioned car felt like a paradise. When I got out at my turnoff I got hit by a wall of heat and the wind was almost taking me off my feet. I never experience such a strong wind. I could hardly hold my balance. Next two the road was a field of countless wind turbines. Step by step I fought my way through the wind along the 2km long turnoff to my highway. I took me almost an hour. 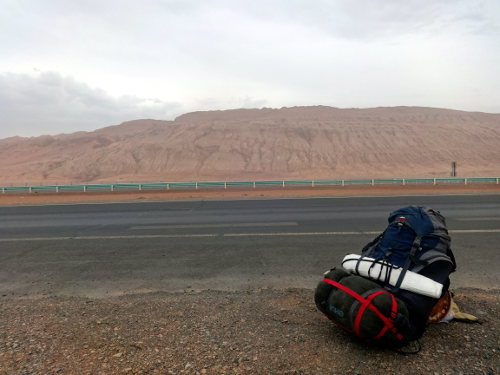 I could stop another SUV with Chinese here and we passed the huge field of wind wheels. They dropped me of at some highway police. On my whole trip the Chinese police was always friendly and very helpful. They easily found another car for me and I arrive the desert town Turpan like this. Many people warned me about the heat in this ancient oasis village. Indeeed, at 8pm it was still 42 degrees. 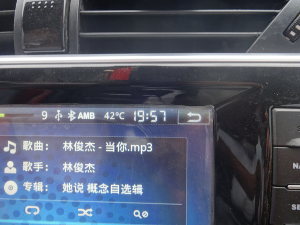 I didn’t find anything interesting in that town, instead I made friends with some young Uyghurs. 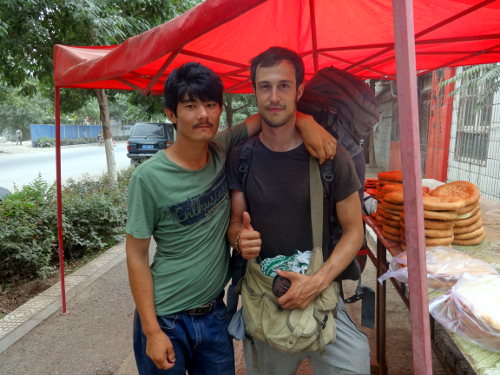 Then I walked back to the highway. I hitchhiked two more cars and got a lift with a young family that absolutely wanted to invite me for dinner. I agreed. We went to a nice and chic restaurant. On the way I was impressed by the huge sand dunes next to the village Shan-Shan. 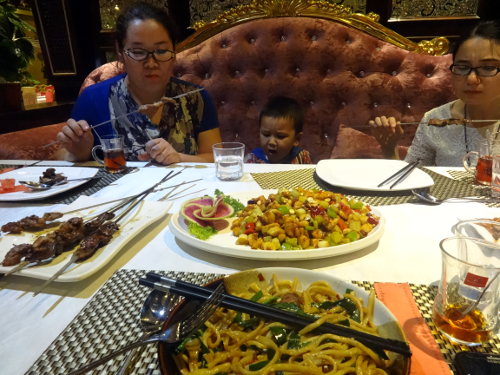 After the delicious meal they found a perfect place for me and my tent in a park. There was a nice and calm place where I could put up my tent. Before they left they gave me a big water melon and also their phone number. If I would need anything I should just call them and if I wanted to go to the highway tomorrow I could also just call them to give me a ride.

After we said goodbye I sat in front of my tent and enjoyed the rest and the stillness. As I sat there I notice it was the first time since I left Kashgar that I had break. I put my alu matress in the grass and laid on it. It felt so good just feeling the silence. The air was now pleasently mild and I was breathing deeply while I thought about the past days. It is a bit exhausting and always so much is happening. One adventure comes on top of another. In between there is little time to process your experiences. 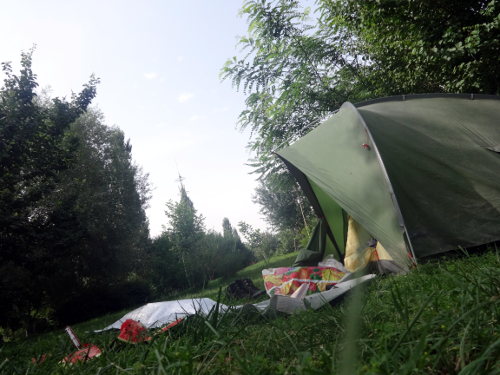