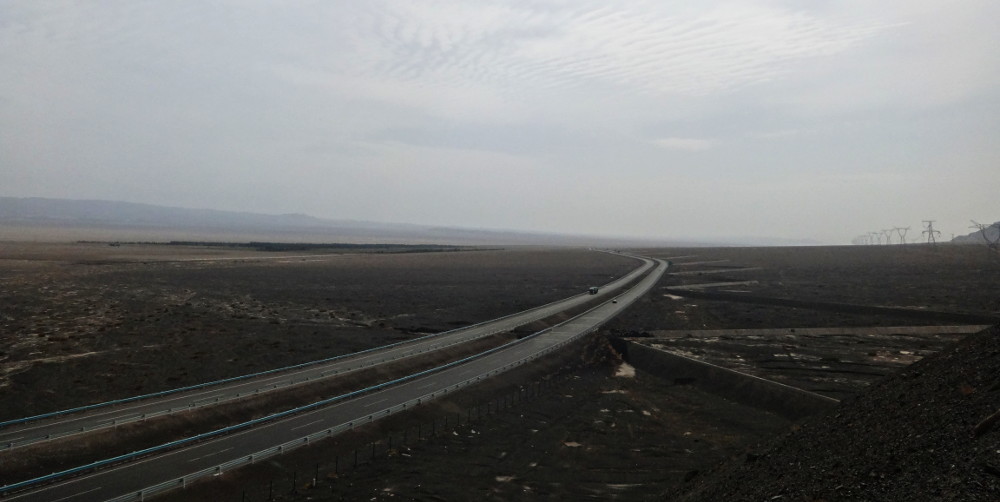 After I crossed the border from Kyrgyzstan to China by foot the officers just put me in a truck which was supposed to take me to the Chinese border checkpoint. It was a remote border crossing in the high Pamir Mountains. On this road there were only trucks. 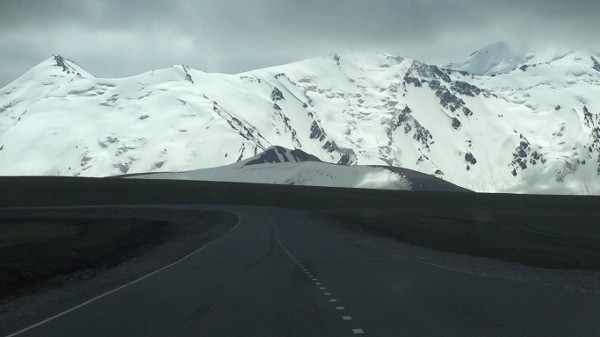 Pamir mountains from Kyrgyzstan to China

Thus I drove with this Kyrgyz truck driver on the road of no man’s land. Already passed the Kyrgyz border the first Chinese border check point was about 40km inlands. At the sides of the roads  high fences were soaring to prevent anyone leaving the road. On the way I had to get out several times to  show armed soldiers my passport. 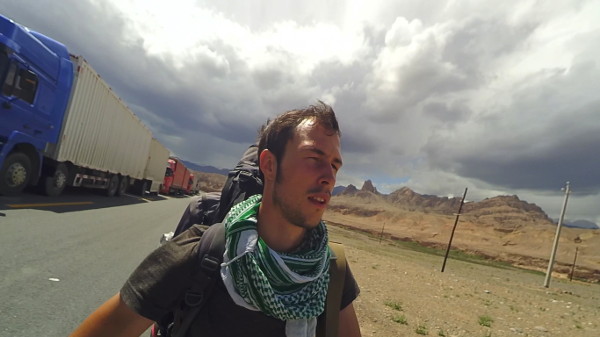 Soon we arrived at the seemingly endlos line of trucks waiting at the next border check point. To my surprise the driver told me now to leave the truck and continue by walking. I really thought I could go with this truck to the first Chinese city. The driver explained me he would wait here until the late evening until he could pass the border. So I grabbed my backpack and jumped out of the truck into the no man’s land. I was wondering wether I was already in China or still in Kyrgyzstan oder even in none of them. Anyways, suddenly I had the feeling that this is where my Chinese adventure begins. The trip to which I was looking forward for such a long time was starting now. Yet it was also the trip which I had the most respect of. It was the most uncertain one. Hitchhiking 6000km through huge China from West to East all the way to Beijing. From here I was even closer to Bagdad than to Beijing. In between the legendary Taklamakan desert, the second biggest sand desert in the word (after the Rub al Chali in Saudi Arabia), as well as the mighty Gobi desert which is shared by China and Mongolia. 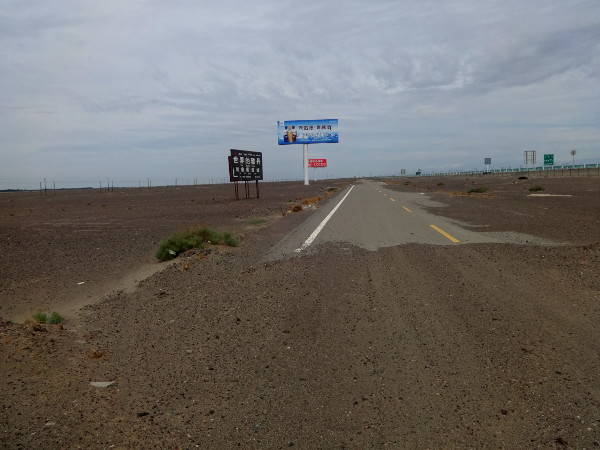 Thisis where no hitchhiking rules apply. 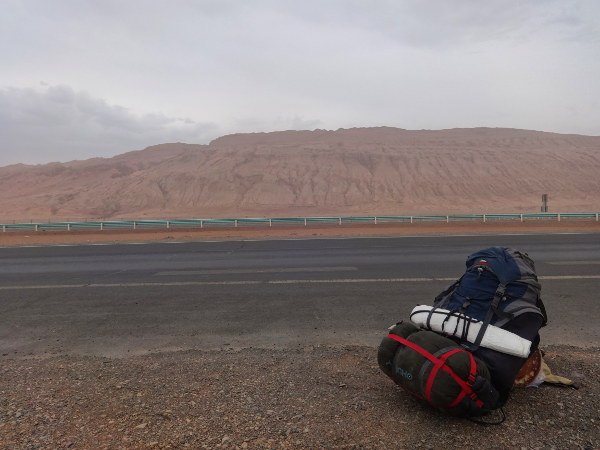 Indeed, I was already hitchhiking through the vast steppes of Kazakhstan but that was another level. Kazakhstan was only a little preparation. Western China is a seperate world. I couldn’t find the trace of an information wether something like this would be possible or not. The people here speak neither Chinese nor Russian nor English of course. They are Uygurs and they speak their own Turkish language. According to them, they are the ancestors of the Turkish. They are Muslims and live in their land that they call West Turkistan, yet only if there is no-one listening. 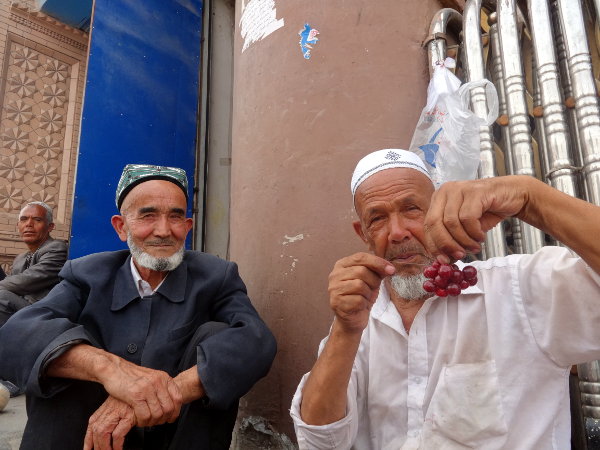 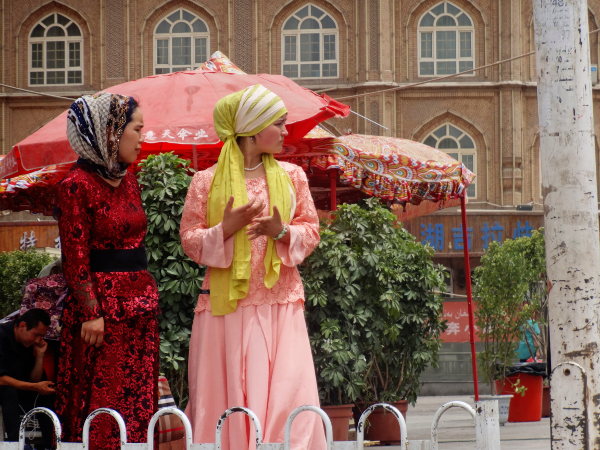 Some say it is their actually their country occupied by the Chinese – similar to Tibet. Also many assume that in the future it won’t be possible for foreigners to travel here anymore – like Tibet. No need to say that something you can safely forget about. In my fantasy I was fascinating a long time about this world. How it would be and how can this be possible? Yet on the map you can clearly see a road. Thus, I wanted to try. I didn’t make big preparations or plans but I was confident – confident to find my own way. 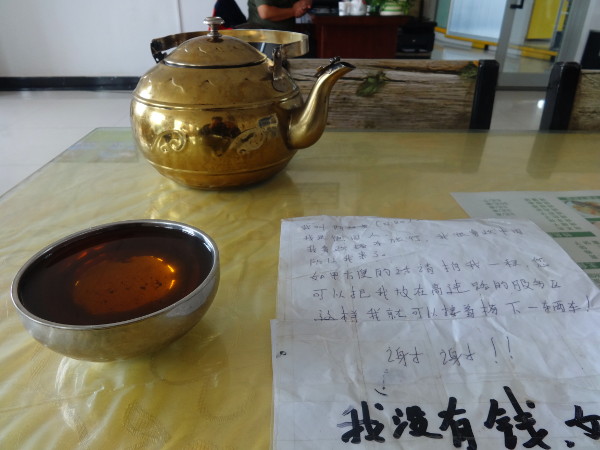 This Chinese letter was made to help me hitchhiking. It introduced me:

My name is Niko. I am from Germany. I like traveling and I like China. That’s why I am here. Even though I cannot pay for it I would be very happy to get a lift from you. Please don’t bring me to bus or train stations just drop me off at a service station on the way. From there I can find another ride continuing my way. And don’t worry I do this by choice 😉 Thank you a lot!

Walking along the endless line of Chinese and Kyrgyz trucks I felt excitement and trust – not knowing yet what kind of difficulties waiting for me already at this border check point. Some truck drivers were waving their hands to me and I exchanged some words the Kyrgyz truckers. They wished me good luck! 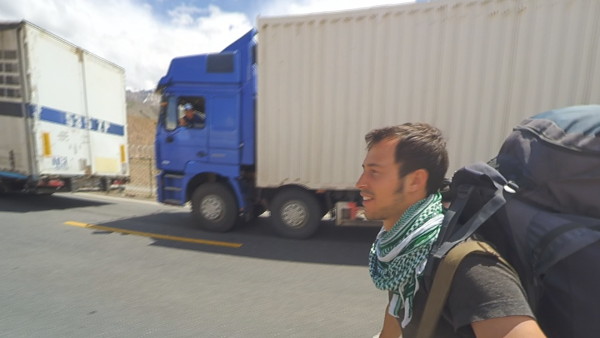 How can I do this?

At the border they took my passport and sent me out to wait. I had no clue what was happening there. Finally a Kyrgyz guy explained the situation: I was supposed to take a taxi – a very expensive taxi for 100 Yuan (around 20€) to the next border checkpoint where they will stamp my passport. There is no other option at all. Every two minutes I saw a truck slowly passing the border. It would have been so easy to hitchhike one of them. I was sure: A taxi is not an option. So I let the only taxi go without me. I talked to some higher ranked officer hoping that he would let me do my thing. I met with zero tolerance. Either I take a taxi or I stay here forever. I tried everything but they just ignore me. „You can sleep outside and we hope you have enough food.“. I felt their disregard whenever they walked passed me, this stranger sitting there alone and doesn’t know what to do. Soon I noticed, I absolutely wanted to do my thing and ran with the head on a brick wall. It would not work like this. Inside my self I was already regretting that I was so stubborn not taking the taxi. I had bet and I had lost. That’s why I was sitting here now, hungry and in the rain.

It is not getting easier…

After around two hours one officers told me that there was another taxi. I knew it would be the last chance and with some pain I paid the 100 Yuan. The driver drove to the next checkpoint which was further inside the country. He dropped me of after my passport was stamped. It was dark by now but I was really in China finally. My goal was to make it to the first bigger city called Kashgar. I didn’t mind to hitchhike in the night. I refused the offer of ride of one taxi driver. After a few meters he caught up with me again. Now he was friendly offering me to take me at least to the next bus stop. He showed „two“ with his fingers and I asked „two?“. „Two.“ he repeated. Can’t be too bad, I was thinking while getting into the already overloaded taxi. Like that the drama was running its course. One minute later the driver dropped us of at a bus stop – maybe 800m away. For that distance in the overloaded taxi he wanted 20 Yuan, not 2. This was no option for me. I got ripped of once today and that is enough. The taxi driver got really angry and aggressive. I was circle by more and more people. I reached my arm with 2 Yuan to the driver and just took the money and threw it to me. He got more and more aggressive and didn’t open the trunk for me backpack until I would pay. I was now among all this people shouting and felt very angry. I made a picture with my phone of the car and made clear: „Either I get my backpack right now or I call the police.“ I took my phone out, ready to call the police. He didn’t seem to be impressed. He pointed his finger to a police station just 50m away and told me to go there. Without hesitating I did so.

When I came back with the police officer in a black uniform the discussion started again. I talked calm, even though I was so angry. In contrast to that the taxi driver was totally aggressive and shouting in my face. „Is this okay?… Is this really something that is okay?“ I turned calm but insistently to the police officer. A few moments later he told the driver to open the trunk. I could take my backpack and go. „This is exhausting!“ I said to myself and disappeared without a great orientation where to go. 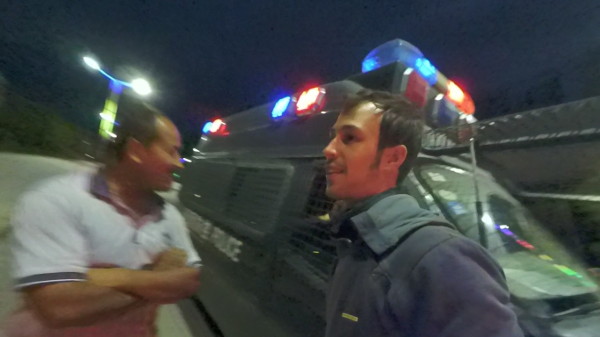 The night was not going to becoming better and the next couple of hours were going to be a struggle; Me standing on some Chinese road. No cars stopping. In the middle of the night. Two old women and a man going walk a walk trying to help me but they couldn’t understand my Chinese letter. Therefore they stopped a big police car for me that looked more like a little tank. I showed them my letter and tried my most charming smile. Nothing great came out of this in the end. The police just left and I was still standing on the road. „Okay, you have time. Take it easy. You are not in the mountains anymore and it is warm. You can easily sleep outside.“, I talked to myself while I recognized something like a wine field next to road. A potential place to sleep. 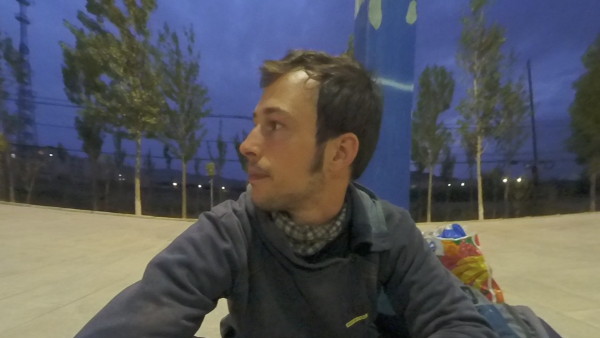 Exhausted and wondering what to do